What Is Education? Pt. 1

I made the mistake of listening to a radio piece the other day on home education. Of course, it was nothing more than ‘yellow journalism’ (look it up…that’s why the goddess made Google). But one story really illustrated WHY home education should not be regulated…inspected. At least not by ‘education’ departments.

Mohammed was fourteen. His parents had been ‘home educating’ him for ten months. Because it was either home ed or he would be sent to a special school for young people with behavioral challenges. The school basically forced his parents to home ed. Sadly, that is far more common than you think.

Unfortunately, this meant that Mohammed was missing education all together as his mother lacked the skills or education to help her son. To be clear…that too was unnecessary. Had she been connected with a strong home ed support network, they could have assisted her to find resources.

These days even an uneducated parents can home ed their child…through GCSE levels. All the resources you need are online. Courses are available…free or at nominal cost. But that school who forced her to home ed was unlikely to have provided her with that information.

Instead Mohammed ended up in an afterschool program. The director of which spoke on this program about Mohammed’s lack of basic maths skills. He did not know that 72 minus 9 was not 8. Obviously, he had confused subtraction and division.

How exactly can forced home education of less than a year account for the lack of maths skills? When this young person had been in schools for six to eight years? Did they really want us to believe that in less than a year of home ed, Mohammed FORGOT everything he learned in school?

No, the truth is that SCHOOLS failed Mohammed. Not home ed.

But when I say that schools failed him, I do not necessarily mean what you think.

You see…I know and accept that some people will never read, write, or do maths. At least not well. I know this because I parent two of them.

I do not know if Mohammed was one of those people. Or if schools failed to teach him in a way that he could understand. Given that 72 divided by 9 does equal 8, there is some evidence that in Mohammed’s case he has learned some maths skills but merely become confused by symbols. If you look carefully… — minus and ÷ division…that would not be difficult to do. Perhaps it is as simple as Mohammed needing glasses.

No, where the schools failed this family is in not recognizing his needs, not investigating them. Not digging deeper to discover…

Thing is…we don’t know. And neither does he.

Feel like a failure. You could hear that in his voice on that radio program. Mohammed at fourteen had given up. His mother used the word depressed. It is an all too common issue for young people ‘educated’ in schools. Especially those with special needs like autism, dyslexia, dyscalculia, and others.

Cognitive Death…when the thirst of learning is extinguished.

And it is not necessary. Any or even all of those conditions do not equate to a lack of intelligence. The ability to think, analyze, and evaluate information and sources. My beloved PanKwake shows me this every single day.

The problem is that schools know and recognize only one way of ‘learning’. Reading. Addition, subtraction, multiplication, division. Writing by hand. And my personal bane…spelling. Yet we no longer live in a world where those things are essential for survival.

Today, you can access almost any information you want through…

While schools still place a high value upon rote memorization of multiplication tables, most of us have not done math in our head in years. Not even on the back of a receipt or envelope. Why would we when we have a calculator on our phones?

And writing? Other than signing our names…which is becoming increasingly electronic chicken scratch as well…when was the last time you WROTE a letter or thank you note? No, we text. We email. Heck, PanKwake uses emijos like the ancient Egyptians used hieroglyphics to comment on her fav and least favorite YouTube videos. Actually, these days even that has voice-to-text option.

And spelling? Even after I conquered my slight dyslexia and could read, I never mastered this one. And for the past twenty years, even as a writer, I have not needed to. I am often quoted as saying…’That’s why god created spell check. Well, the god of Microsoft.’ These days Google works better.

No, the skills that we need to take us into this new millenia are not reading, writing, spelling or arithmetic. Yet those are still the only measures of learning and intelligence that schools are measuring.

It reminds me of this meme… 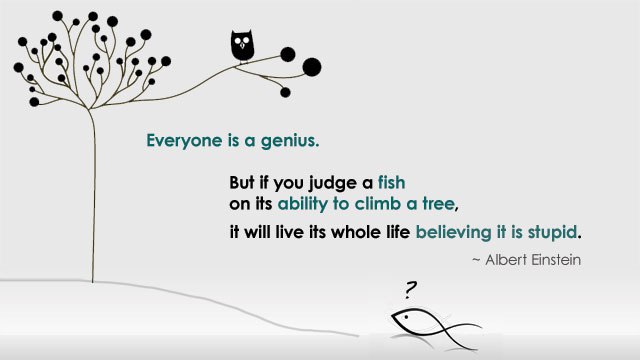 It is sad that no one ever took the time to discover Mohammed’s genius. So know that fish thinks himself stupid.

PanKwake on the other hand knows she is genius…for a new age. Whether she ever reads or not.

But that is another meme…and tomorrow’s blog.

One response to “What Is Education? Pt. 1”