One of the myths of both #neurodivergent and #HomeEd is isolation. Loneliness. Not going places or having friends.

With PanKwake, nothing could be further from the truth. She is actually an extrovert. She craves people. Whether that contact be face-to-face or online, she needs some peopling every single day.

Some might ask…then why not send her to school?

A couple of reasons…

Bullying – Not all socialization is good. In fact, the age segregated, adult-led school environment is one of the most unnatural forms of socializing there is. As a result, it is the breeding ground for bullying.

When I was exposed to the sociability factor of self-directed learning/minimally invasive education, my first reaction was…yes, but ‘children’ need adults to keep them safe from bullies. In the almost two years of parties at #HomeCrazzyHome, where the adults chat and the #LittleHumans are truly self-directed, I can honestly say that the only times (two to be exact) that bullying has been a problem have been those where our schooler friends were involved.

Balance – No one is totally extrovert or introvert. It is about the balance between the two…and control over it. While PanKwake needs much more ‘peopling’ than Cookie Monster or I, she needs it on her terms…not someone else’s.

I am reading Free to Learn by Dr Peter Gray right now. And in addition to unschooling, he supports alternative or ‘democratic’ schools. I have and continue to struggle with the necessity of schools…for those whose parents do not have the patience to #HomeEd their #neurodivergent #LittleHuman.

But having opened our #HomeCrazzyHome to other #HomeEd, I have experienced first hand the extreme challenges of balancing the needs of the individual while at the same time adhering to my ethos of #RadiCoolUnschooling. So I was left wondering…is this a viable solution?

Of course, I took it to the expert…PanKwake. Not surprisingly, she had already heard of the concept on YouTube. I asked…would a school like that work for you? Her reply was instant…No, too many people. Yes, my extroverted #LittleHuman said ‘too many people’. She has and knows her own limits.

Even Dr Gray admits that one of the limits of ‘democratic’ schools is autism. Without a motivation for sociability, autistic #LittleHumans do not thrive and learn in them as neurotypical ones seem to. So back to the drawing board with that one.

Nonetheless, socialization and fostering real friendships has from the beginning been one of the key goals of #HomeEd with PanKwake.

Despite the bullying, she had had two good friends in school. We attempted to maintain contact with those. For one that was impossible due to her family’s religion. But for the other, we saw them several times a week after school for that first year or so…and that helped.

We tried #HomeEd groups of course. But the one we visited was not very inclusive. Back then too, sensory issues made travel even a short distance more challenging. So after a couple of tries we gave up.

The one thing that did work was…parks. In the summer, there were times that we spent the whole day. Yes, eight hours sometimes at the park. While we did have trouble with bullies, I was able to help her handle the situation…and at times almost come to blows with ignorant adults raising ignorant children.

It was at a park that we met PanKwake’s best friend…Freedom. Like PanKwake, she has additional learning needs. They just bonded. And while we had other friends, they were besties.

We lost touch when we moved, but this trip was a chance to reconnect…and they did.

After the big day at the Aquarium, Eye, and Hamley’s, PanKwake had had enough. My extrovert was ‘peopled’ out. So Day 4 was a quiet one. She slept in. Then Freedom and another older also additional needs friend came over for the afternoon. It has snowed again during the night so the girls made snow angels, had a snow ball fight, and even attempted a tiny snow man.

The next day, Freedom and her Mom joined us at the Natural History and Science museums. Of course, we got stuck in London for a couple of extra nights. Our final day, we took the girls back to the leisure center that was one of their old haunts. They once again enjoyed ice skating. And we discovered the new trampoline park. They ate lunch at one of our old favorites too. 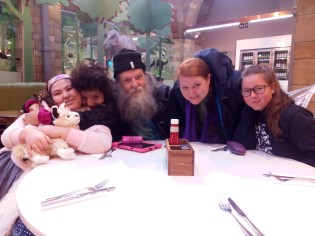 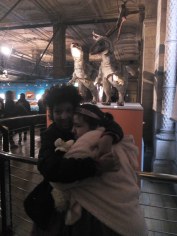 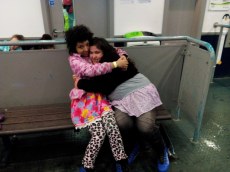 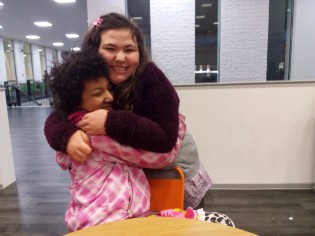 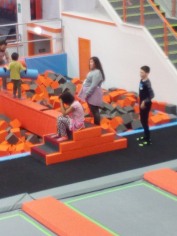 At the same time, PanKwake’s nights were often spent on Google Hangouts chatting with her Swansea #HomeEd friend FairyBear.

No…neither #HomeEd nor #neurodivergent #LittleHumans are isolated or lonely. They just need a safe and supportive environment in which to practice their social skills…and schools are not and never have been that. I know…I was bullied. My older offspring were too.

But I think those photos make the case for the sociability of #RadiCoolUnschooling better than my words ever could.