Today is my 3rd anniversary with the most wonderful partner a woman ever had, Alan Cox…better known as Cookie Monster or Prince Charming.

They say a picture is worth a thousand words. So, I want to celebrate with this photo essay which combines both…

Yes, three years ago today, we had our 1st and for a long time only date. We sort of went from coffee to living together in the space of less than a week. There are no photos from that first date…we aren’t the selfie type.

Besides I am not sure I would want any. That first date was anything but ‘perfect’. It was in fact as Crazzy as we are.

I got lost…on the way to the coffee shop that I choose. How was I to know that the Costa right at the entrance to London Bridge was not actually called London Bridge? I wandered for an hour looking for the right one.

Texting him the whole time. Swearing that this was the only date I was going on with this man. Cussing that if he had not come all the way from Swansea to meet me, I would just go home. I did not know then that he had THREE dates that weekend. That I was the last…and the one that he was sure would not work out.

When I finally made it, my reward was a cwtch. He taught me that Welsh word. The most important one that means far more than simply hug or cuddle. It is still my favorite. In fact, when he came back the next weekend he bought me a pillow that says that. But I am getting ahead of myself.

After coffee, I took him back to my tiny, dingy London flat. I had already told him that there was no point in getting to know or like one another then three or more months down the line introducing him to PanKwake for him to bolt…as other men had. Saying they could not handle ‘it’.

When we walked in PanKwake was chasing her big sister around…with a can of fake poo. Yes, fake POO. I thought…he was really nice. It was nice meeting him. I’ll give it ten or fifteen minutes before he checks out.

He did not. In fact, he did something I had never allowed any man to do before. He spent the night. Not like that!

I felt guilty because he had come all that way to see me. Spent three nights in expensive London hotels on a bank holiday weekend. Of course, I did not know about those other two dates…or the fact that he could easily afford those hotels. But then again Fate and the goddess has looked out for us…

When he went back to Swansea, I was not sure if I would hear from him again. But he was back the next weekend. We have slept apart only a handful of times since then.

This is the moment I realized that I loved him. We were fooling around a bit in my bedroom while PanKwake was playing with her dolls in her room. Every few minutes she would come in and show Alan her GI Joe that she had dressed in Barbie’s finest. She would ask what he thought…and why. He was so patient with her. Then the moment she left the room he returned to treating me like a woman, not just a mother. I knew then he was a keeper….

The question was…were we keepers for him?

So, off we went to beautiful, sunny Swansea to see if this Crazzy thing had legs…could it actually work?

There were some rough moments. PanKwake melted down from Swindon all the way to Cardiff. But we stayed on the train. I think that meltdown was because I had forgotten to pack her camera. But no worries, we bought her another…and this is the 1st picture of us as a couple…taken by PanKwake with that camera… 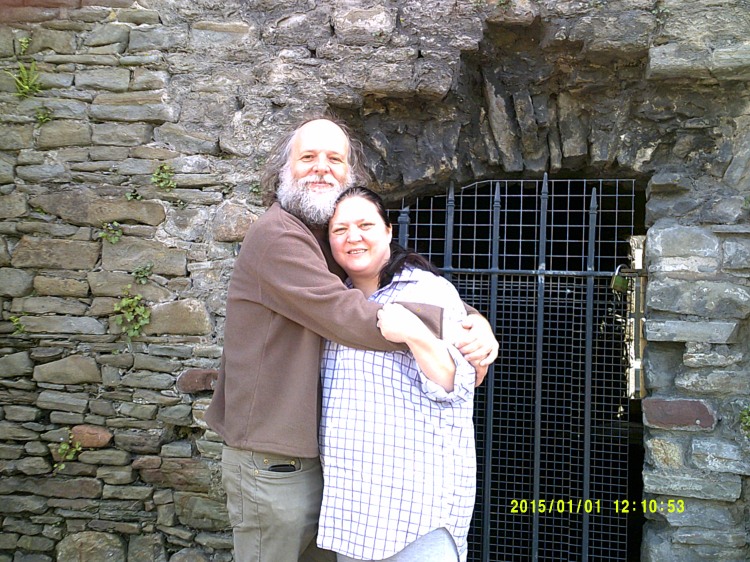 That camera saw lots of use on that trip…and the ones to come.

Yes, we did make it. Despite our Crazzy, we were keepers in his eyes, too. Actually, one time I asked him…Do you love me? Despite my Crazzy?

He replied…I love you. Because of your Crazzy.

And crazzy it surely is…

It was not just those GI Joes that PanKwake liked to alter. Alan is famous for that beard. Some would consider it sacrilege the things that she has done to it over the past three years. This is just a small sample: 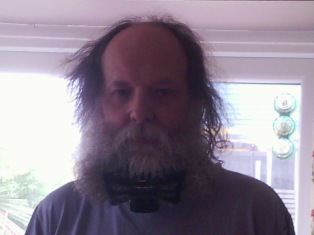 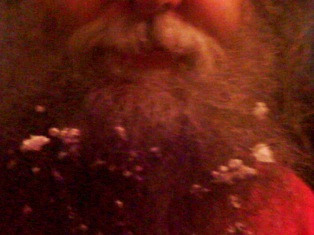 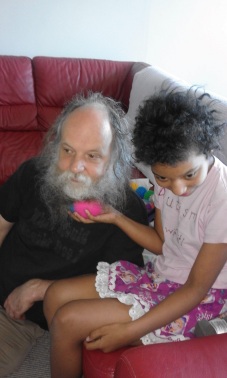 Those are just a few. Of course, there have been water gun fights at dawn too. I remember the first time PanKwake woke him up with a water gun. I thought…he’s gonna get rid of us for sure now. Instead, he loaded his own and took to sleeping with it under his side of the bed. I fell a bit deeper in love with him then.

Of course, when the next door neighbor could not handle PanKwake’s noisy tramping on the stairs, he went and bought us #HomeCrazzyHome. I was blown away. That showed more than anything how much he loved us and how committed he was.

Well, so too do the onesies…which have become our big Christmas tradition. 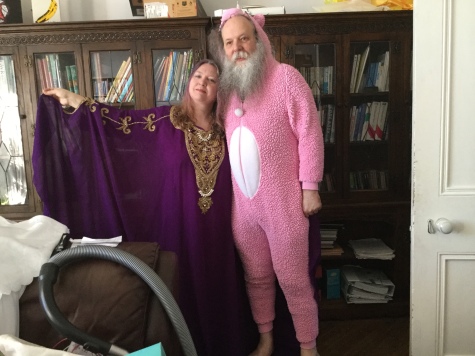 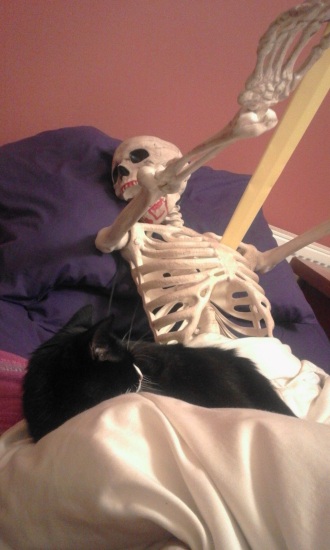 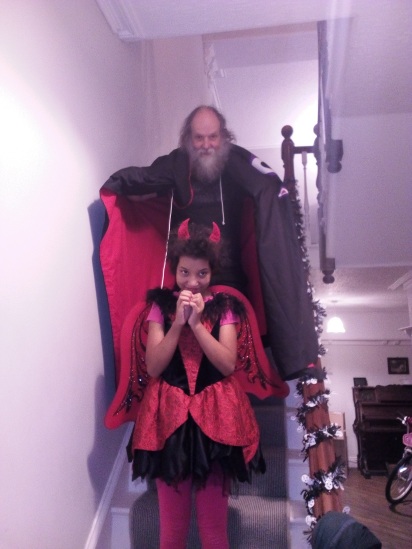 Family holidays that all too often end in disasters such as getting stuck in London when all the trains are canceled due to snow…or food poisoning. 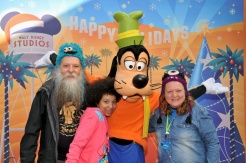 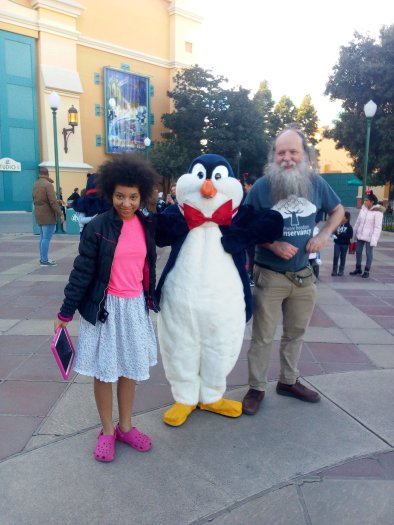 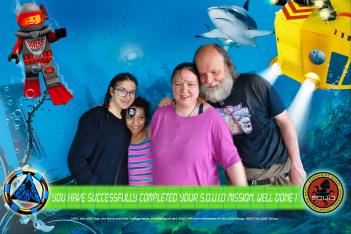 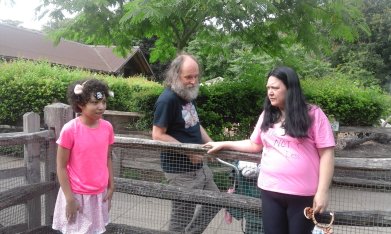 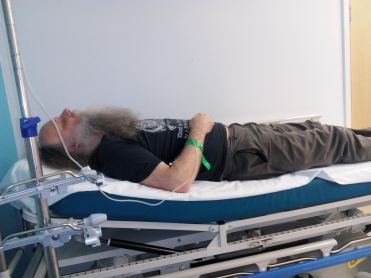 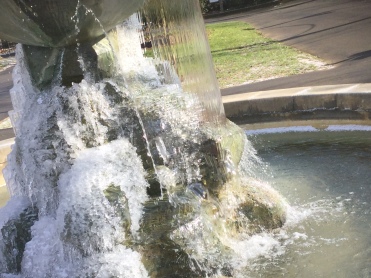 We even managed to get him on a few rides now and then. 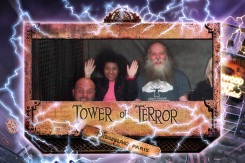 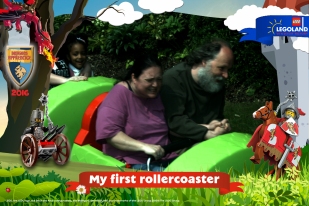 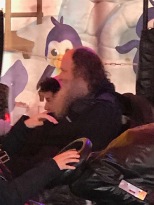 Yes, this is most definitely #HomeCrazzyHome. And I love Alan more today than I could have ever imagined three years ago. I love him more each and every day.

I look forward to more years with the best Dad and partner any woman ever had.

I love you, sweetheart!