After over three and a half years living together as a family, in July, Alan and I decided to make things legal. Yes, get married. Something I thought I would never do again. But it made sense for practical reasons and it really does not change anything.

Now, this is his second marriage and my third. But I have never really done the ‘wedding’ thing. So, we decided to have a ‘real’ wedding. A small one, of course. Nothing posh or fancy.

We could have gone to one of those venues who specialize in weddings. Make our picks and have everything done for us. But come on, this is @HomeCrazzyHome for a reason. So, of course, we decided to Do-It-Yourself.

We had thought it would be simple: three or four dozen friends at the council office, lunch at our favorite restaurant, and that would be it. But is life ever that simple?

No sooner had we announced our plans to friends than a couple of my girlfriends started to clamor, ‘I’ve never been a bride’s maid.’ So, it went from very simple to having three bride’s maids. Which meant four bouquets (don’t forget mine too). I am not dressing them in matching outfits or anything, but they are having to wear hippie style crocheted flower headbands like this one. 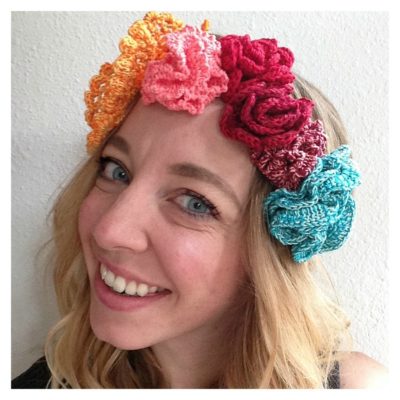 How to Crochet Yourself a Flower Crown

I began crocheting flowers for the headbands and bouquets straight away. I even picked out patterns and fabric for my dress and veil. But Alan kept saying, ‘we’ve got plenty of time.’

When the new year rolled around, I got serious about this wedding thing. Then our first major hiccup: the restaurant that we wanted to host the reception could only handle twenty people – less than half of the number invited.

I panicked. Wouldn’t you? I looked at all those ‘wedding venue’ places. None of them were ‘us.’ And expensive?!? Yes, Alan ain’t poor, but still, we don’t believe in being frivolous.

What about just renting a community hall somewhere for the reception? Makes sense, right? But when we looked around none of those had the same facilities for the children and young people that our @HomeCrazzyHome has.

In the end, that is what we decided to go with. The reception here at the house. But that means A LOT more effort, planning, and work.

So, I sat down and made a plan. Everything we needed to be done, including building work that needed finishing on @HomeCrazzyHome. We consulted with our builder and our closest friends. Most of whom think we truly are Crazzy for doing this. Then we went with it.

It is less than three months now until our big day. I have broken that plan done even further into a 90-day plan. And I am already behind.

The invites that were supposed to be out by the end of January, still aren’t. The new date for that is this weekend.

I need to take all those crocheted flowers and make them into actual bouquets – also by this weekend.

Oh, and did I mention that I have not one but TWO practice dresses to make this month. I have narrowed my wedding dress down to two pattern options. The only way to know for certain which will be easiest to sew and look best on me is to make them. But since that material I picked was relatively expensive, the best option is to make both out of other material. Then wear them for a bit to see which everyone thinks looks best and which is most comfortable. That needs to be done this month too.

And I still have more flowers to crochet for my bouquet and the bride’s maids’ headbands.

Is your head spinning as fast as mine?

The ironic thing is that over fifteen years ago I took a course on wedding planning. I was working as a fundraiser in Los Angeles. Planning major fundraising events was a big part of my job. So, I figured that I could use those same skills to make a bit of extra money on the side as a wedding planner. Maybe even do it fulltime and be able to make my own schedule around my family?

Of course, that never happened. But I am so thankful right now for all those skills I learned. Like that 90-day Planner.

It isn’t time to panic again just yet. I am not that badly off schedule. In fact, I am spending today reworking the schedule and catching up on the things I am behind on. (After writing, of course.)

Would it have been easier to spend the money and just go to one of those wedding ‘factories’? You bet. But we have some very good reasons not to.

Those are our reasons. And some good things to think about if you are planning a wedding, DIY or otherwise.

So, for the next few months, I thought I would share with you the things that are going into our sustainable, DIY wedding.

Today, I am attaching that 90-Day Planner:

Next week, fingers crossed, we’ll work on those homemade invites.