I did it! Last week, I managed to make and mail or deliver most of our invites. I made them all actually, I just have a few more to hand-deliver when I see people. But all the major ones are done.

Like I said last week, we decided to go with a DIY wedding. And that includes our invites.

But, of course, in this day and age, whether or not you even send out invites is questionable. There are so many options, even if you do want more than just a simple text or email to friends and family with all the details.

You can make lovely electronic invites (and now that I am thinking about it, I should have done that for at least some of the people). Especially for those who live far away. Email is, after all, faster and more reliable internationally.

I really am beating myself up, considering who my partner is, I should have gone with at least a high-tech mix. Oh, well, I did not.

I went with individualized ones. The idea was to have a different photo of Alan and me on the cover of each invite. Then I ran into a problem. In three and a half years together, there are barely any photos of us together, especially alone.

The truth is that one of us, usually me, is behind the camera. I have twice as many photos of Alan with my daughter @PanKwake as I do of us together. The remainder of the photos is the cheesy ones from theme park holidays as a family. That is fine for some of our friends, but not so for the more formal invites.

Thankfully, a dear friend who is an advanced amateur photographer took some lovely ones on our first anniversary, enough to do that handful of ‘formal’ invites. In the end, I found twenty-one good photos of us in three and a half years, and I needed to make twenty cards. Problem solved.

I had bought blank cards and envelopes months ago. I had some lovely patterned cardstock for the backgrounds to add color. So, away we went.

Of course, the first thing to decide was what to say. Obviously, the old fashioned way:

The (name of parents) invite you to the wedding of their daughter (bride) to (groom).

Was not appropriate. Sometimes, these days it is the children that invite people to the marriage of their parents, and we toyed with that one. Especially since many of our friends are people that we know through @PanKwake. But that might have hurt the feelings of my older children who were not named.

In the end, we went simply with:

We changed the wording a bit because both of us know that formal marriage is not as important as our love and commitment. We are getting married on our fourth anniversary. So, next year won’t be our first anniversary, but our fifth. Confused yet?

The, of course, we had to choose fonts. Yes, I know. Fonts? But you want it readable. Not in wingdings or some of the almost as illegible cursive fonts. We actually choose two fonts: Monotype Corsiva for the formal and this one, Rockwell, for the informal. Personally, my favorite font is Comic Sans. But Alan informs me that in terms of believability that one has the lowest rating. So, I guess not for this one.

Then, after all that hard decision making and adulting, it was time for some fun. Cut and paste, the old fashioned kind. My old lady quilting club would be scandalized but I used my rotary cutter, the blade was old and needed replacing anyway. A cutting mat, rulers, and rotary cutter made it so easy. I cut out the wording which I was able to print two or four to a sheet.

Then I cut out, just a bit bigger some lovely decorative card stock that a friend had given years ago for card making. I glued the words to the card stock, then the cardstock to the paper, using a paintbrush and PVA glue. Nothing fancy, folks. 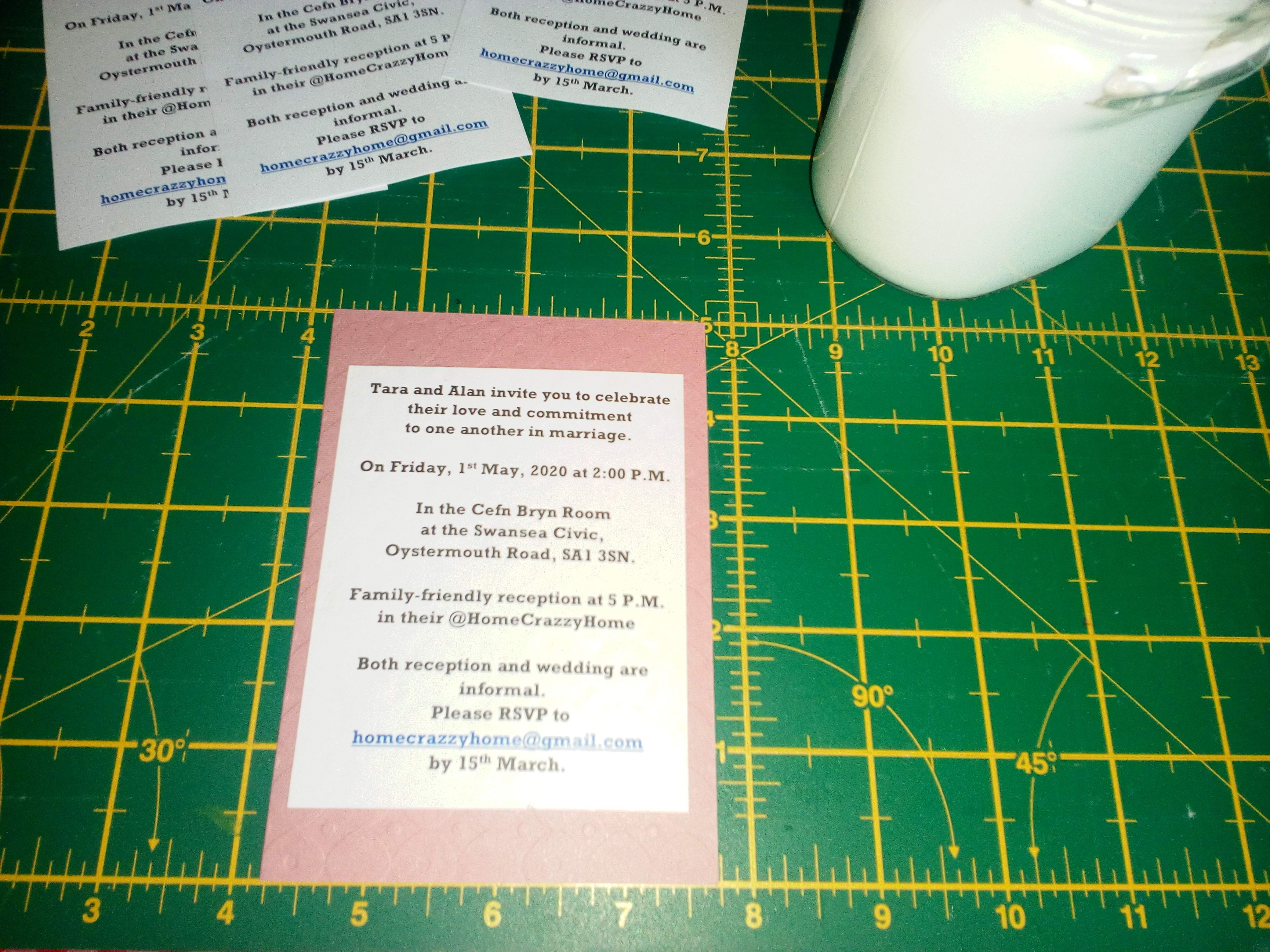 While those dried, I trimmed the photos to fit the front cover of the invites. I glued them to the front, and let them dry. Then I glued the cardstock inside the invite.

For invites that are completely unique and different for each person, perhaps even a keepsake?

Not bad! If you’re going with paper invites that is.

Now that the invites are checked off my DIY wedding list, what’s next?

Bridal bouquets, of course! See you next week for more on those.