The other day I wrote about the importance of avoiding food waste. That post focused upon freezing, cooking, and reheating food before its Use By date. Today, I want to share with you another strategy that I have used almost as long as Alan and I have been together. Our Weekly Menu is not just for minimizing food waste (zero tolerance these days) but has some other advantages that I’ll share with you later. So, what does our weekly menu look like: 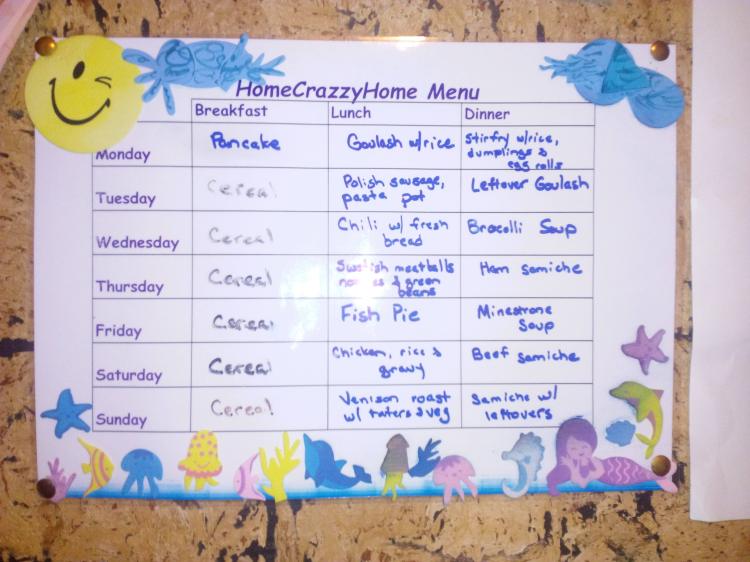 That’s just a simple piece of paper divide into columns and rows, labeled, laminated, and decorated, but it works well for us. And I have tried other methods. I began with keeping them in Word and Excel documents that I printed out each week. That has the advantages of recording the history of your meals so that you don’t serve the same thing too frequently. But honestly, that is no big deal here as we both have favorite meals.

You may need to experiment with the format that works best for you and the time frame. When I worked as a chef/cook, we did monthly menu plans. I tried that with us one time but I found that it was harder to stick to.

The other thing is that I prepare the menus once a week, usually on Sunday or Monday morning, and then get his approval. Partly this is because you don’t want to make something that your family does not want to eat. And besides, that’s just how our @HomeCrazzyHome works best. I then post it on the bulletin board in our kitchen. So, both he and I know what is to eat at any given time.

Having a menu makes a HUGE difference in terms not just of food waste but it also minimizes those I’m too tired to cook nights or worse yet ‘I have no idea what I’m gonna cook’ nights.

The key is to remain flexible. Most weeks I do NOT abide 100% by the menu. Either because I forgot to lay something out or we just don’t feel like eating that particular thing that day or we had leftovers that we need to use up. That is fine. I already see changes in this one I wrote yesterday based on the new fruit box that our milkman delivered.

Of course, these days writing and sticking to those menus become even more crucial. There are three items this week that I am batch cooking (see that other blog if you don’t know what that means). The goulash is made with Quorn pieces that should not be refrozen even after cooking so we are eating that twice. But the other two, chili and Swedish meatballs, will be cooked and frozen – our version of homemade ready meals that will prove vital if I get ill or just on those nights when I don’t feel like cooking or when I worked too late in the garden.

The other thing that I will tell you more about later is that I used my new prepper inventory spreadsheet to write this menu. I have to admit that it beats guessing what is in the freezer or planning something only to realize too late that you don’t have all the ingredients. A situation that means I either need to go to the stores or more likely we bought takeaway. But that inventory is a blog post in itself.

Off to write, then more gardening today. The goddess has been gracious; according to the forecasts we have a ten-day to two-week window just when we need it the most to get that food security garden planted.

Goddess bless and stay safe,
From our @HomeCrazzyHome to yours