Has become the latest joke at our @HomeCrazzyHome. But it is not far from the mark. Yesterday, I logged off the computer at 8 a.m. I began my ‘farmer’ work and did not stop except to make lunch until almost 6 p.m.

True, some of that was re-arranging the gymnastics rooms, which is currently storage and sorting for @PanKwake’s little kid toy collection. But even that was somewhat farm-related as my intention was to take over the area by the bay windows for a couple of spaghetti squash that needed to be transplanted to containers but could not be put outside just yet.

What could have possibly taken so much time?

To begin with – watering. Turns out that it is best to water your plants in the morning. And I have three – now four- areas to water and check on seedlings. The back yard with its raised beds and ever-increasing plethora of containers. Good news, though, my carrots in two-liter plastic soda bottles have finally splotched (i.e., sprouted). And my peas and broad beans have almost doubled in size since I planted them out over the weekend. 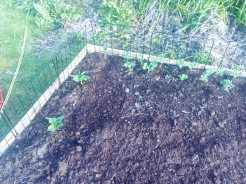 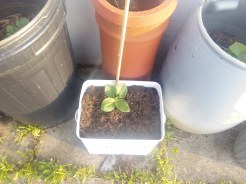 Then on to the inside. My formal junk room that should have been remodeled by now has another bay window full of seedlings, as does the family room, all three windows there. The general rule of thumb is that between half and three-quarters of the seeds you plant will sprout. Mine is more like 90% or more.

I am transplanting them into bigger pots and giving some to all our friends. Even then, I have more than we need. The Feed & Seed that will deliver our compost has said they will take any orphans to sell and donate the proceeds to the local park fund. That is fine with me; I just want to get them into the hands of people who will grow them. And promote the ideas of sustainability and now preparedness.

The gymnastics room took way more time than I wanted to spend, but it is now multi-functional. My plants, @PanKwake’s toys to be sorted and given away, and a play area for her once again. I was able to clear enough floor space not just for my planter tubs but for her trampoline and balance beam as well, even the old mattress that she uses for tumbling.

I cheated on lunch. I only microwaved some chili that I had made and frozen a couple of weeks ago.

Then it was back to farming. I spent most of the afternoon transplanting spaghetti squash. I don’t know what I was thinking. These plants take up loads of space, about as much as pumpkin. In my raised beds, it will require two to four square feet. It requires a 50 cm planter, though it can be accompanied planted.

I set aside two of my really valuable rubber tubs for them. One has the squash, five or six peas, and lettuce. The other has squash, lettuce, and runner beans. Then I transplanted the rest of them into five-liter pots for my friends, a few smaller ones for the Feed & Seed to sell, and two for planting out in the raised bed later. When I checked them while making my coffee, the ones in the containers had grown an inch – overnight!

I also had my second round of peas to begin in pots. Although it is late enough now for direct sowing, I don’t have my other beds ready yet. So, I planted out some more in pots for transplanting in a couple weeks. Peas are what are called sessional plants. In other words, to maximize your harvest, you plant out a new batch every two to four weeks from March until June. So, this is the second of four installments.

By the time that was finished, it was dinner. Food, bath, and bed. Do you know how I know that the Farmer Tara comment is accurate? I was in bed and asleep at a bit past eight last night. It was still light outside. And I woke up even before my five a.m. alarm this morning.

But at a time when many are complaining they cannot sleep, it is good to fall into bed so exhausted that your Kindle keeps falling out of your hands. It reminds me of a line from this song:

The work we done was hard. At night, we’d sleep cause we was tired.

By the way, that is the song that I sing to wash my hands – a dozen times a day.

I may not be a coal miner’s daughter, but I am a product of some pretty marvelous real-life Steel Magnolias who taught me to value everything we have been given. In these times, that’s a pretty valuable skill set.

One thing that grow-your-own does besides providing food security and fresh, nutritious produce is that it makes you appreciate the real value of food – and farmers. No longer can you pop into the local grocery store and buy that head of lettuce for less than a pound/dollar. For one thing, you know what salad is supposed to taste like. And for another, you know that way more than a pound’s worth of work went into planting, watering, and harvesting it.

Okay, time to get off here now. I won’t quite make eight this morning, but nine for sure. There is still so much to be done. I have kale to transplant today. And hopefully, perhaps get the other planter stand out front cleared of last year’s stuff and planted out with fresh. I’m reusing all that ‘worn-out’ dirt as the bottom layer of my raised beds. But it is lots of work to sieve the weeds and old roots from each pot.

Is it worth it?

I suppose that remains to be seen. But I was surprised to discover that five of my challenging to grow asparagus have survived. So I am hopeful for even more bounty this year. What will I do with all of it? Besides eating it? Well, I will freeze and can some of it. I will also feed our friends who may not have the space we have here at @HomeCrazzyHome to grow as much as they need. And I hope that I have enough to offer some to food banks.

You see, I no longer think of this as a vegetable garden. This is in the process of becoming an urban farm. And I am Farmer Tara – who is off to plant some brussel sprouts, chicory, and chard. And to rearrange the garage for storing all my farm implements.

Goddess bless and provide for you and yours,
From our @HomeCrazzyHome to yours