Yesterday at Oakwood theme park with PanKwake, her big brother JalerDasBirdz and ever wonderful carer Mog was just about…

I say just about because PanKwake had a tiny meltdown at the train station in Narberth as we waited for the taxi. I forgot to pack one of the sensory toys she had selected which had gotten separated from the others. But it was relatively short lived and one of those questionable ones…is it a meltdown or a temper tantrum? She is having more of those.

Mog and Jaler were both shocked by how I handled it. I told her that I would go back (an hour and a half each way…plus expense) to get it. But I also added…once I get you all settled at Oakwood and we get your souvenirs…if you don’t find something that is good enough. And I meant it…I was prepared to do it. BUT I knew PanKwake…

She needed validation…to know that I understood how important this was to her.

And more importantly…she needed CONTROL. She had lost it when I failed to bring all the things that she had selected. So now she needed it back. I gave her that.

And a healthy dose of distraction…we got into an argument about whether the house across the street was pink or purple. Of course…she won. It was purple.

By the time that we got to the park all was forgotten…it won’t be later I assure you.

I will let the pictures tell you the rest though… 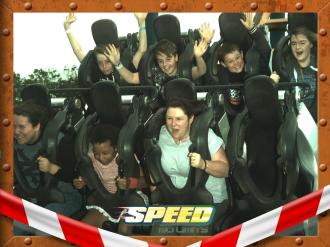 There was one other hiccup too.

Oakwood’s add-on ride that is…expensive! I knew that 1) Jaler did NOT want to do it 2) the cost and 3) my child on THAT is terrifying!!!! So I had tried telling her before hand that we were NOT doing it. I tried saying it was sold out. But nothing worked. It was that ride or meltdown that ruined everyone’s day. So I bit the bullet and paid the price.

But even that was not enough. PanKwake did not want to do it alone. I did manage to stand my ground and spare Jaler. But bad me…I threw Mog under the bus. Being the wonderful person she is…she went along. And in the end…she liked it even.

Funny story…I told PanKwake that I was only doing this because I was looking for the one ride that she said…NO! Never Again. Jaler had the perfect answer…But Mom she already does. Cars. Buses. Trains. And we all laughed because we knew it was true. getting to and from Oakwood was the hardest part.

But we did it! Not a single meltdown on the trains or taxis. Sure she talked too loudly. But that was the stress. And thankfully everyone understood.

On the way back…back half way…PanKwake asked Mog…How much longer? Mog told her a Ninjago plus a Phineas and Ferb (i.e. 45 minutes). I guess that was too long because she dropped her head and was asleep in less than a minute.

That was 13 hours ago and she is still asleep NOW! Yes, she is still breathing. I’ve checked. A couple of times.

PanKwake can do ANYTHING that she WANTS to!

Of course, I also know…that which goes up must come down. And she has not yet mastered the art of soft landings so I am certain we will have a HUGE meltdown. But even then…it will be at home and we are ready for it. So it is soooooooooooo worth it to give her a day like yesterday.

Let’s be honest, folks, there are plenty of ‘normal’ neurotypical kids who meltdown at theme parks. And LOTS of parents too. Probably even more adults than kids.